Whether you’re new to RVing or Tiny House living, or very experienced, we should talk about electricity.

First, you should know that there are two basic types of electrical current, AC and DC.

AC is short for Alternating Current; the outlets in your home are AC, and most of the things you plug into the wall run on AC power (most, but not all).

DC is the abbreviation for Direct Current; Your car battery supplies the systems in your car with DC power, the stuff you plug into the accessory outlet in the car run on DC power (again, most, but not all).

If you’re wondering why we bring this up, it’s because living in an RV or a Tiny House is most likely going to present you with using a mix of these two very incompatible forms of electric current. Understanding this is important to living safely and comfortably in a tiny space.

For the purposes of Tiny Space Living, we’ll keep our conversation simple, and centered on systems most relevant to RVs and Tiny Houses.

RV’s usually have a power interface, also called a “hook-up”, that allows you to plug directly into a grid-sourced power cable and supplies your RV with all the AC power you need while you’re parked in an RV camp ground. This allows you to use conventional small appliances in your RV.

The majority of RVs rely on using these ‘hook-ups’ to power their systems. The same kind of system can be installed in a Tiny House.

Here’s where it gets tricky: The generator produces AC power, but to charge the battery bank you’ll need DC power.  The battery bank supplies DC power for use without the generator, but your household appliances need AC power to operate.

As luck would have it, this confusing situation has been worked out by brains bigger than my own. Two devices, the Inverter and the Converter, are used to change the current types so that our systems can integrate and seamlessly provide your tiny living space with electricity.

Let’s take a tour of what these three components, the generator, inverter, and converter do, to make life good.

Most small gasoline powered generators produce AC power, which is most useful from a consumer’s point of view.

The generator produces usable power only while it’s running and doesn’t store any energy for future use. You can plug directly in to most generators. Most folks put the generator where the noise won’t be bothersome, and run extension cords to where they need power. Some RVs have integrated generators in sound-dampening spaces.

Solar panels generate power only when enough direct sunlight is hitting them. The DC current produced is then stored in a battery bank.

Because DC power needs to be consumed in very specific voltages, few devices can run directly off of a solar panel generating electricity without first running it through either an Inverter, or DC adapter.

Still with me? Good.

You can buy all the components for solar generation separately and assemble a system to accommodate your specific needs, or you can purchase a “Solar Generator” which also includes the battery bank and inverter, usually as an integrated unit.

Both types of power generators have obvious advantages and disadvantages. A long stretch of rainy days can leave your solar power running low, but an extended stay off the grid might leave you without fuel to run the gasoline powered generator.

Moreover, a good RV serves as a comfortable home outside of your actual home. You may fill it up with modern appliances or other comforts unique to you. In this case, the best RV generator is a great option that helps you to make your RV modern and functional. It is also necessary to consult some RV generator reviews to get a good camping generator.

See also: What Size Generator Do I Need for My RV?

Many use a combination of both, but either one will probably require the use of inverters and converters. 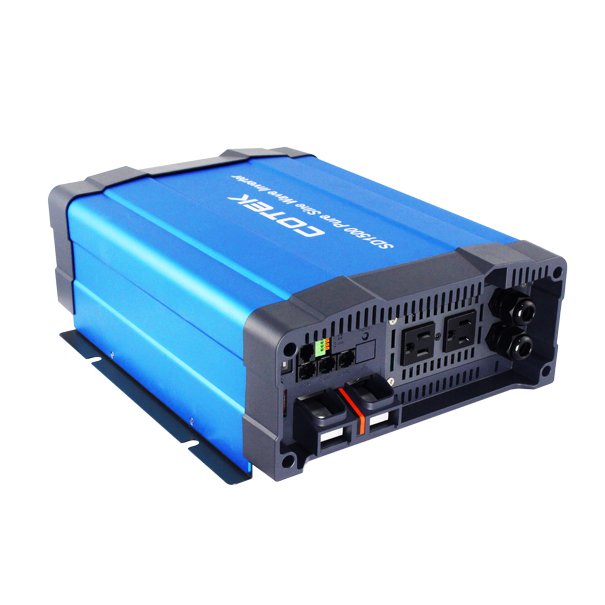 If you’re using solar panels or any kind of battery bank, the power coming off them is DC, which you’ll generally want to change to AC before it’s useful to you. You can’t plug the coffee maker into a car battery, it simply won’t work. An inverter takes DC power and changes it to AC power, allowing your fair-trade medium roast to fill the pot. You’re going to want that.

Seriously. Without an inverter you’re limited to DC power.

Inverters produce a number of differing types of Alternating Current; Square wave, Modified (Quasi) square wave, and True/Pure Sine wave. Each type being better or worse depending on your needs.

This is what you get straight out of your home outlets. Some generators are equipped to provide pure sine wave, but most inverters aren’t quite as clean as grid power sine waves. Practically everything you own with a plug will run as designed on a Pure Sine Wave  inverter. It’s the ideal. If you’re going to run a computer, or any sensitive electronic equipment, you want this type of inverter. They’re the most expensive but will perform the best for all your needs.

A Modified Sine Wave inverter will work with most appliances, but it’s a less “clean” signal, which can impact the efficiency of some devices. As a result it can cause some appliances to draw as much as 20% more power. It’s not recommended for highly sensitive equipment, but will work just fine for motors, compressors, and household appliances. You may notice some reduced performance from light fixtures and multi-speed power tools, but it will run them. The majority of consumer grade generators use an inverter that produces a Modified Sine Wave. In most cases this is a solid choice.

If you find a super great deal on a generator it may have a Square Wave inverter in it. Check. If it does you should keep looking; it’s not as good of a deal as it may seem. Square Wave inverters will run simple tools, but little else. If you’re still using your Grandfathers Black & Decker corded drill, you’ll probably be ok, but not much more will work correctly. It’s a “dirty” wave, and it lacks enough frequency range to be very useful. Our advice is to avoid them.

A converter essentially does the opposite of what in inverter does: it changes AC power into DC power.

You might be wondering why anyone would want to do that. Many of todays electronics have batteries that charge on low voltage DC input. If you have any small electric appliance that uses a “DC adapter cord” chances are the adapter is converting the 120V AC power into a specific DC voltage.

Different devices use power differently, so not all adapters are interchangeable. Small converters are what allows these different adapters to accommodate the power needs of specific devices.

Another application for a converter is charging large battery banks from a conventional power source (AC). You’ll still need to convert the power to DC in order for the batteries to store the energy. Battery input must be a low voltage DC in order to charge. (Converters are also used in welders, but we’re hoping if you own a welder you knew this already.)

A converter can turn DC into AC like an inverter, but for the sake of keeping things simple and easy to understand, we don’t need to talk about that. Suffice to say those instances are an order of complication higher which would only confuse us even more at this point.

There are three common types of converters:

In comparison with inverters, converters are usually mentioned. Both are electrical devices that convert current but do different functions. The following table is the comparison between them:

The Difference Between Inverter vs Generator

It is essential to know the difference between inverter and converter, especially where you want to change or convert power from one energy form to another.

The table below will summarize some of their common differences:

Some Thoughts on Installation

Power systems can get a bit confusing. The deeper you dig into electricity the weirder it gets, but that’s okay.

Keeping things simple, here are the important things to remember:

We hope you’ve found this information useful. In the future we’ll dig a little deeper into setting up electrical systems in your tiny living space, and discuss tips and tricks from those who’re experienced.

And remember, while many of us tend to be do-it-yourselfers, electricity is an area where qualified assistance could save you from exposing yourself to serious risk.

This site uses Akismet to reduce spam. Learn how your comment data is processed.

If you want to receive more small space living, green living and travel tips, plans, then join our newsletter!